A Brief History of the Selling of Art in Florida

Florida has somewhat matured over the years, especially in its attraction of artists to the state who come here for the relatively inexpensive cost of living and the sunshine.  It is also attractive because inexpensive housing and a fairly good base of art collectors come through the state.

The earliest art sold in Florida was not to Floridians.  It was to tourists. Artists such as Martin Johnson Heade or Frank Shapleigh rented studios at the Ponce de Leon Hotel in St. Augustine and these artists would paint and sell their wares to the wealthy tourists from up north.  Their cluster of studios became somewhat of a cultural attraction to the wealthy patrons staying at the hotel.  This having happened only over 120 years ago as the hotel opened in 1889.

The works were created generally as souvenirs for the wealthy and would typically be scenes that included flora and fauna typical of Florida or perhaps street scenes as was the case with St. Augustine.  Sunsets, steamers and flowering plants were common themes.  This was the start of the art industry in Florida.

Today, while we have certainly transitioned from the old itinerary using steamers and stagecoach, the fundamentals haven’t changed all that much.  Tourists still come in to Florida and still buy art and take it home with them.  While we don’t know for sure what percentage of art is bought by what are now Floridians, we do know that tourism makes up a significant, if not a majority, share of this as the two major art centers of Florida today – St. Petersburg and Miami – have become tourist destinations in the past century and continue with their international draw today.

But back to the 1880s for a moment, as St. Petersburg and Miami didn’t yet exist as incorporated towns in Florida, this was at a time when the railway ran as far south as Jacksonville and steamers plied the St. Johns River. The typical visitor’s itinerary consisted of a trip to Jacksonville, the largest city in the state, St. Augustine for its history, a steamer down the St. Johns River and another down the Ocklawaha.  There were variations on this itinerary and stage coaches were used to shuttle people from the ports where the steamers would call in to small towns such as Gainesville and Ocala. 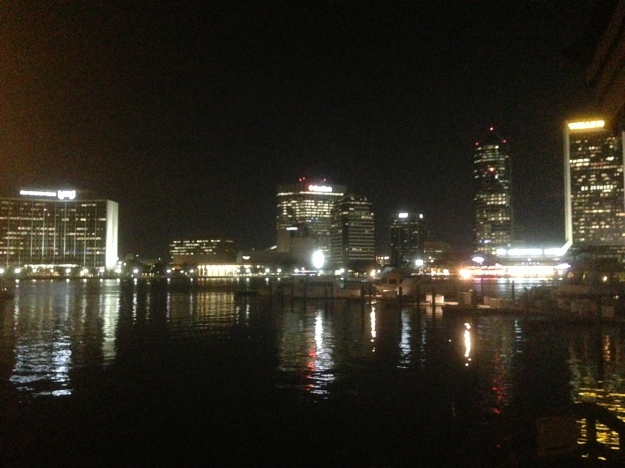 The city of Jacksonville has changed dramatically since it was the first transportation hub of Florida tourists in the 1880s.

Many of these early tourists were considered naturalists as they had an interest in nature.  There was, in fact, little else in Florida at the time.  While most paintings were nature scenes and landscapes, there were details of some of the flowers of Florida in some of these early paintings.

But the artist colony was focused in St. Augustine as the tourist center of the state was located there.  Tourism was in this case acting as the distribution channel for art.   It isn’t very dissimilar to some of the earliest cultural attractions in the state of Florida.  They relied on tourists to support them as the residents of the state were typically unable, for the most part, to support larger cultural attractions that primarily consisted of museums.

In the industrialized north, philanthropists funded museums and supported artists.  There was no tradition of this in the agrarian south and the model of support became something between fractured philanthropy and cultural tourism from the North.  The state’s earliest “museums” were designed to attract tourists.  These were in Jacksonville and St. Augustine.

Slowly, artists began to locate in areas outside of St. Augustine.  St. Petersburg probably got the earliest start with artists, or visitors who took an interest in the arts, having had an arts club formed in 1917, ten years before the Florida Federation of Art was formed and well before the 1924 founding of the local arts club in St. Augustine.  Earliest museums in the state included the Ringling in Sarasota and the Norton in Palm Beach.  Art was starting to diversify as a commodity in Florida.   In the decades that followed the Dali Museum in St. Petersburg was soon exporting art in the form of reproduction posters throughout the world.

Today we have significant colonies of artists still in St. Augustine as well as Key West, Miami and St. Petersburg.  There are other clusters of artists throughout the state in other towns and cities of course and many towns now have an arts district.

Marketing Art and Tourism in Florida

The point of this article is to consider what is the next step in the maturation of the arts industry in Florida.  If you look at other similar destinations that have art as a common denominator, you’ll find a movement and an eager tourism industry embracing the “local” feel to the area in places such as Ashville, North Carolina, Richmond, Virginia and Provincetown, Massachusetts.   In much older destinations such as Paris or Venice, albeit far larger cities, the arts scene has flourished to include museums, cafes, galleries and artist enclaves.  In St. Petersburg, my hometown, a very active group called “Keep St. Pete Local” is heavily involved in maintaining the local character of the city that keeps it well positioned as distinct from destinations where a more chain style of infrastructure exists.

One of the arts districts in St. Petersburg, the Central Arts District, has links to the other districts with a trolley service.

Miami and St. Petersburg are both in a unique position to be able to further develop their arts industries through tourism.  Art Basel in Miami continues to be a strong annual arts-related event that attracts tourists in great concentrated numbers.  St. Petersburg continues to draw cultural tourists year-round in what is developing as an arts fair that happens throughout the year and in multiple arts districts throughout the city.

While Miami has matured to include very high end art, St. Petersburg’s niche has been in accessible art for a much wider audience.   The “authentic” experience that a certain number of tourists are now looking for is readily accessible in St. Petersburg and in parts of Miami.  The Wynwood Arts District is rapidly maturing in Miami and several districts have emerged in St. Petersburg that allows the visitor a more authentic experience that isn’t created, such as was the artists studios at the Ponce de Leon Hotel in St. Augustine or the concentration of museums in some cities.

And while it is always up to the artist to sell his or her art, there are quickly becoming areas in the state that are more conducive to this.  And as always in Florida, it is seasonal.  It is up to the state’s tourism marketing organization and the respective county tourist development councils and convention and visitors bureaus to use the arts districts to attract more like-minded tourists and to direct those who are possibly secondarily interested in the arts to these districts.

Second Saturday Art Walks in St. Petersburg have become increasingly popular with tourists and residents. Many other tourist destinations use this concept to promote the arts.

Where Henry Flagler knew that there was a demand and clustered artists around a number of studios in the back of the Ponce de Leon Hotel in St. Augustine, our present day promoters of tourism, myself included, must make it easy for our visitors to find the artists and their works.

Art galleries, shows, festivals, arts centers, artist cooperatives, pop up exhibitions, and artist studios have all become part of the tourist experience in some parts of Florida.  To succeed in attracting more tourists who are prone to not only visit cultural attractions, buy locally-produced art we must target those tourists and let them know what the experience of visiting may include and that is art.  There are thousands of tourists that come through Florida’s cruise ports and a percentage of them all buy prints of art on cruise ships during art auctions.  They could easily be buying original pieces from Florida artists.

Many cities and towns in Florida have arts centers including Delray Beach.

We must target the people who are most likely to buy art and spend time in our destinations.  Today, it is even more easy to focus on this with the demographic and psychographic information available combined with the myriad of distribution channels to reach these people.  For example, a number of articles have appeared recently speaking to the growing and flourishing arts scene in St. Petersburg.  These writers likely were reached through Twitter, blogs, websites and Facebook postings in some way.  Their articles then further reach yet more people and eventually a reputation as an arts center develops amongst those who are inclined to visit arts destinations.  Advertising messages also can be directed to these audiences and those responsible for marketing to visitors have access to make this happen.

It is important to look at the history of arts and tourism marketing to be able to understand how to move forward.  The essence of tourism marketing vis-a-vis the arts is to convince people to visit and buy art.  This is done through reaching those most likely to visit with your message.  Any destination can do this and with the right resources, can do it better than it is doing presently.