The Product and Who Was Promoting It

As previously mentioned, the product has been a mix of cultural facilities: visual and performing, antiques shops and malls, bookstores, unique neighborhoods, city parks along the waterfront and the events that took place there, along with art galleries and restaurants.

The opening of the then Stouffer Vinoy Resort in 1992, refurbished by Fred Guest for just over $90 million, contributed significantly to the city’s image. Finally, the city had a resort that complemented its museums. This was at a time that the failed retail and entertainment concept known as Bay Plaza was becoming apparent.
It was also in 1992 that a group of people formed a group called Common Ground that promoted downtown St. Petersburg and held monthly street parties along Central Avenue. This group of marketing-oriented professionals also spent social time together and the friendships formed helped speed along the work to get behind marketing downtown St. Petersburg as a cultural destination.  I had mentioned this in more detail in Part 2.

With improving neighborhoods, real estate agents became involved in the process as they marketed homes in the downtown neighborhoods, all within close proximity of the cultural facilities mentioned before.

In 1996 a small group of people, coordinated by the Downtown Partnership with Marty Normile and Eric Carlson, formed to discuss downtown transportation. After many meetings, the City of St. Petersburg, after great involvement by Anita Treiser, agreed to donate to a new non-profit group one of the former trolleys that ran in operation at The Pier. The group included the museums, two hotels, the downtown merchants association and the Pier.  Here is the first brochure and timetable for the Looper – downtown St. Petersburg’s trolley.

A route was developed and each of the stakeholders made a contribution to the trolley. Plans were made to sell advertising. Professionals who had jobs to promote their own facilities did all this. I remember one hot day climbing over seats at Carlisle Ford with David Blackman and Mary Lee Hanley measuring spaces that could be used to sell advertising to help support the trolley, which we named The Looper.

Wayne Atherholt of the Dali Museum, Terri Garnhart of the Museum of History and David Blackman of Great Explorations all cooperated regularly in jointly promoting the museums. This picture is circa 1993.

We managed to contract with a gambling ship which operated shuttle buses to handle the daily driving and maintenance. Unfortunately on the first day of operation the Looper had major engine problems because the oil was low. Our first major setback had just occurred. Undaunted we continued with the assistance of the city and the stakeholders and today the Looper is still in operation connecting the major cultural facilities, lodging establishments, entertainment complexes, antiques malls and all the downtown galleries, restaurants and retail shops. Of course, office workers and tourists became the target audience for using the system.

An early article on the Looper trolley appeared in the St. Petersburg Times.

At about this time the Welcome Guide Map and its owners, Jim Wray and Chuck Wray, got involved as a commercial operation to promote St. Petersburg with a map specifically aimed at the downtown to help position the area as a cultural destination. Florida Suncoast Tourism Promotions, under the leadership of Drake Decker, also helped in many ways by distributing cooperative materials for the cultural attractions such as Museum Month.  I also recall Darlene Kole putting together a coop ad for us in SEE Magazine. 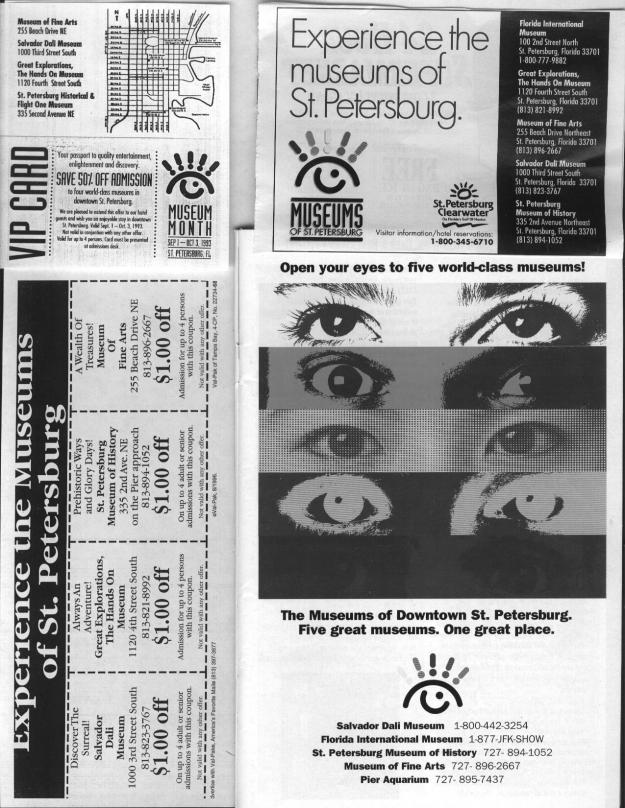 Cooperative Marketing of the Product

Much of the cooperative marketing has been mentioned in the prior pages; however, it cannot go unsaid that these efforts included many low-cost techniques: maps, press releases, joint efforts, group efforts, events, neighborhood parties, happy hours, brochures, posters, and a great spirit among those involved helped make the hard work a lot of pleasure.

Mayor David Fischer held visioning sessions in the mid 1990s that further solidified what the marketing people already knew; downtown St. Petersburg indeed was the center for the arts in the Tampa Bay area. It wasn’t until the travel editor Gerry Volgenau from The Detroit Free Press visited that we finally got someone who could see our vision and write about it.

The fact was, our common vision had become a reality. At the time the article was published, it featured the headline “Florida’s Culture Coast” (reprinted on page 29) with a dateline of St. Petersburg. It was finally recognized that St. Petersburg had become the arts center of the West Coast of Florida. This was the first time, in 1996, that we finally got some major coverage of what we had been working so hard to achieve — recognition that the arts and culture were transforming the city, contributing to its economic success, and making downtown St. Petersburg a lively and exciting place.

The story that finally broke for downtown St. Petersburg being recognized as the cultural center of the west coast of Florida.

Museum Month continued despite storms and even an oil spill that sent visitors packing away. The First Night organization helped start the event in St. Petersburg under the leadership of Pat Mason and Jim Durning.  This was another event that took many of the arts organizations under an umbrella and packaged them to show a critical mass of arts and culture.  It most recently celebrated its 20th anniversary in St. Petersburg.

Another major turning point for the city took place during the run of the Titanic exhibition, which drew over 830,000 visitors to downtown St. Petersburg.  The brochure promoting the exhibition also included wording on the other cultural attractions of downtown and briefly went under the branding of the QuARTer.   A group of developers were visiting the city to consider a large entertainment complex near the museum on vacant land used to park school and tour buses. A line extended outside the museum building as people waited to buy tickets for the first available tour – and it was at night. 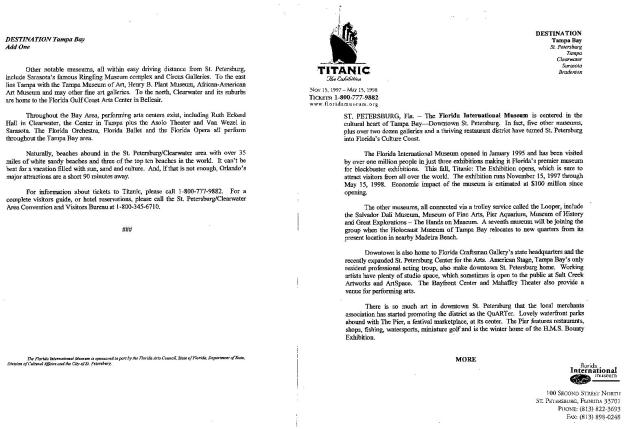 The Florida International Museum received coverage all over the world for its record-breaking Titanic exhibition that spanned 27,000 square feet and 830,000 visitors in six months. All group tour operators, wholesalers and travel media received this piece on the destination that focused on downtown St. Petersburg’s arts and cultural appeal.

The hardest selling point for the developers was whether anyone was going to go downtown St. Petersburg to a movie or restaurant at night. They took one look at the line around the Florida International Museum and the rest is now history. Baywalk, an entertainment complex featuring multi-screen cinemas, retails shops, restaurants and nightclubs continues to be successful — and a cultural institution was primarily responsible for convincing them to give St. Petersburg a try.

Each city and town in Florida, or across the world for that matter, can benefit from some of the lessons that St. Petersburg learned. Many of the people involved in the early days of transforming this city are now scattered around the country.  Each of them were creative and passionate people who were enjoyable to be around and had positive attitudes.  It wasn’t something borne of money or power, changing St. Petersburg was borne from the spirit of so many dedicated individuals whose passion was not profit but challenge.

The critical key, in my opinion, to creating a common goal was to create an atmosphere that was conducive to these creative people to gather, have fun, work hard and work together. Downtown St. Petersburg became such a place with its many features described in this brief overview of how the city became a cultural destination.

A creative culture was born that exists today making St. Petersburg the cultural center of the west coast of Florida now with multiple unique arts districts, including Beach Drive with its concentration of museums, the Central Arts District with its galleries, arts retail, arts education and artist studios, the Grand Central District with multiple arts facilities including commercial arts education facilities and the Warehouse Arts District south of Grand Central that features the largest working pottery in the southeast in an old freight railway station plus single artists studios in old warehouse space.